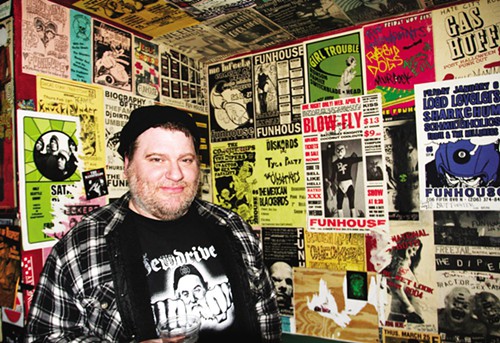 Beloved Venue the Funhouse to Reopen in El Corazon’s Lounge, The Stranger, by Dave Segal

After a long search and some setbacks, Brian Foss and Bobby Kuckelburg will reopen the Funhouse—the popular punk/metal-oriented dive bar that folded in 2012—in Eastlake Avenue club El Corazon‘s lounge space on April 1. Foss and Kuckelburg will become joint owners and managers with El Corazon’s Dana Sims, with all sharing equal ownership of the company and the building itself. The new Funhouse will be open for happy hour seven days a week, with Kuckelburg—who also owns the nearby Victory Lounge—assuming control of the bar and kitchen. Foss will book shows in the Funhouse, which has a capacity of 200. El Corazon’s main room can hold 800 people.

Foss says it’s too early to announce when the first Funhouse show will happen and adds that nobody’s even been booked, but interested bands can contact him at myfatassproductions@gmail.com or brian@kexp.org. (He plans to continue cohosting the punk-oriented Saturday night show Sonic Reducer on KEXP.) You can expect the Funhouse’s familiar booking philosophy to maintain at the new location: punk, metal, garage and psych rock, and the odd hiphop gig. Starting now, Foss is contacting bands for shows and once he thoroughly looks at Sims’s calendar, he’ll be in full-on booking mode. “There are some outside bookers who will stay, as well, ” Foss says. “We’re gonna try to bring a lot of different voices to the table.”

As for why Sims asked Foss and Kuckelburg on board, Sims says, “We’ve been using the smaller room more and more. A lot of people say, ‘This is taking the place of the Funhouse’ or ‘I’m glad this is here because the Funhouse isn’t anymore.’ Going with the strength-in-numbers idea, you find good people you’re on the same page with and you respect. When you add it up among all three of us, we probably have about 75 years of collective work experience [in the nightlife business].”

Foss bubbles with excitement at the prospect of restarting the Funhouse in this new spot. “I’m going to approach a lot of bands that started at the Funhouse but outgrew it. The opportunities boggle my mind. It’s a much bigger room than I’m used to booking, it’s all ages, which I’m not used to doing. It opens up a whole new world of things.”

After the Funhouse closed, Foss began helping out with the booking at the Highline in Capitol Hill, and he says he may occasionally still organize gigs there. “If I get a cool band coming through and both of those rooms are full and there’s no other place to put ’em, I’d have nothing against putting them in a show at the Highline. The Highline’s a good place, Dylan [Desmond]’s a good guy. But my focus is gonna be on the reopening of the Funhouse.”

In the press release for this move, the phrase “a rededication to better customer service” appears, hinting at El Corazon’s history of notoriously aggressive security staff and altercations with patrons. Sims asserts that he’s eradicated the gang presence that infiltrated the venue’s security department and that all three partners will ensure a stronger presence on the ground within both clubs. “Reputations die hard in this town,” he admits, saying certain staffers “were known for beating heads in first, and asking questions later. But combining with the Funhouse, it sends a message to the local scene we want to support it. We’re going to be the largest independently owned live-music venues in Seattle. We’re not corporate-owned; we’re all people who’ve been part of the scene for the whole time. Whatever your preconceived notions were of the past, this is a really positive place going forward. As soon as we have a show that’s worthy of it, we’ll have a grand-opening party. We will definitely have a rager when it’s ready to go.”

Sims is upbeat as he notes the change happening in his clubs’ South Lake Union neighborhood. “In the last couple years, Amazon has moved 40,000 employees within three blocks of our venues. The chance to make the shift from strictly destination venue to live-music venue and neighborhood bar is realistic. It’s proven, because Bobby owns a business right down the street [Victory Lounge] that has already made that shift and has enjoyed immeasurable success. You can have food, drinks, and see a live show at El Corazon/Funhouse.”

Sims concludes, “We have a good opportunity to give some good news to the music scene. We’ve had a lot of bad stuff happen as far as venues and bars, people’s favorite places closing, and whatnot. So I think this will be a boost. We’re not some trust-fund kids from another town. We’re three people who’ve poured their sweat into this scene for a long time and care about it.”